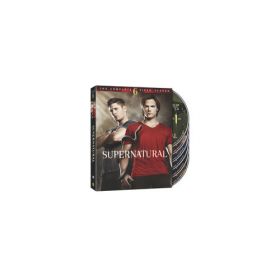 Two and a Half Men

You Can't Handle the Truth

All Dogs Go to Heaven

Clap Your Hands if You Believe

...And Then There Were None

My Heart Will Go On

The Man Who Would Be King

The Man Who Knew Too Much

Supernatural and the Quest for the Soul featurette

Audio Commentary on “Clap Your Hands if you Believe” with EPs Robert Singer, Sera Gamble, and Ben Edlund

The prize: ending the Apocalypse. The price: Sam’s life. Season 5’s horrific finale left Dean alone, as Sam descended into Hell. Now a different man, Dean vows to stop hunting and devote himself to building a family with Lisa and her son Ben. Then, mysteriously, Sam reappears, drawing Dean back into the old life. But Sam’s a different man too. He’s returned without his soul. How the Winchesters confront this greatest challenge yet to their powerful bond is the troubled heart – and soul – of the profound and thrilling 5-Disc, 22-Episode Season 6. As the brothers struggle to reunite, they must also battle deadly supernatural forces. Demons. Angels. Vampires. Shapeshifters. And a terrifying new foe called the Mother of All.

At the same price!